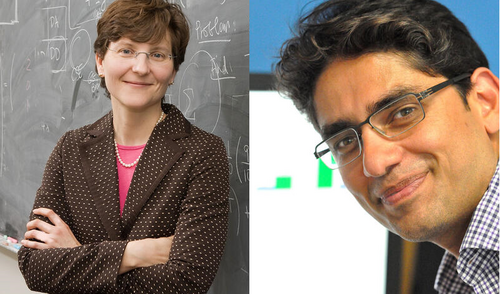 The Department of Statistics and Data Science welcomes Professor Anna Gilbert and Professor Jasjeet Sekhon.  Find out more about them in this Yale News article!

The new faces of the Faculty of Arts and Sciences

Yale’s Faculty of Arts and Sciences (FAS) will welcome 30 new colleagues this academic year who bring world-class scholarship and teaching in a range of fields, including Egyptology, quantum physics, 17th-century English poetry, machine learning, and racial disparities in policing.

“We’re thrilled to welcome this extraordinary new group of ladder faculty,” Gendler said. “All are engaged in field-shaping research that expands the horizons of their disciplines and are deeply committed to outstanding teaching both within and outside the classroom. Individually and collectively, their presence enriches our academic community.”

Twenty-seven of the 30 new hires join the FAS faculty this fall. Three others will arrive in January. Several of the hires enhance Yale’s long-standing strengths in history and mathematics while others reflect the university’s investments in data-driven social science and quantum physics, Gendler explained.

There are 10 new faculty members in the humanities, 11 in the social sciences, and 9 in science and the School of Engineering and Applied Science (SEAS). The new hires were recruited from across the country and across the world, including from Harvard University, Princeton University, Stanford University, and the University of California-Berkeley, as well as from institutions in England, Europe, Asia and Africa.

The additions to the Department of History are especially rich, Gendler said. Three new faculty members are joining at the tenured level: Sunil Amrith, the Renu and Anand Dhawan Professor of History; Lauren Benton, the Barton M. Biggs Professor of History; and Elizabeth Hinton, a tenured associate professor of history and African American studies.

Amrith, whose work focuses on the trans-regional movement of people, ideas, and institutions across South and Southeast Asia, is a 2017 recipient of a MacArthur Fellowship, known informally as the “genius grant,” and comes to Yale from Harvard.

Benton, whose research focuses on law in European empires, the history of international law, and Atlantic world history, previously served as dean of the faculty of arts and sciences at Vanderbilt University. In 2019, the Toynbee Foundation awarded Benton the Toynbee Prize for significant contributions to global history. She has a secondary appointment at Yale Law School.

Hinton, who also comes to Yale from Harvard, studies the persistence of poverty, racial inequality, and urban violence in the 20th-century United States.

Phillip Atiba Goff, professor of African American studies and psychology, is a path-breaking scholar in the science of racial bias. He comes to Yale from the John Jay College of Criminal Justice and directs the Center for Policing Equity, a leading research center on race and policing that hosts the world’s largest collection of police behavioral data. His work dovetails with Hinton’s research and the work of other Yale scholars on issues of policing and racial inequality, including law professor Tracey Meares, a nationally recognized expert on policing in urban communities, and Jennifer Richeson, the Philip R. Allen Professor of Psychology, who studies people’s experience of racial and other forms of societal diversity, Gendler noted.

“We now have a cluster of distinguished scholars across the FAS, in both the humanities and social sciences, as well as at the law school, examining issues of racial justice, policing, and incarceration,” she said.

Other tenured new hires in the humanities include Feisal Mohamed, a scholar of 17th-century English poet John Milton; Nadine Moeller, professor of Near Eastern languages and civilizations, whose work focuses on settlement archaeology and urbanism in ancient Egypt as well as climate change in antiquity; and Jesús Velasco, professor of Spanish and Portuguese, who studies Medieval and Early Modern legal cultures across the Mediterranean Basin and Europe.

Sekhon, professor of statistics and data science and political science, comes to Yale from UC-Berkeley and is an expert in machine learning — the practice of developing computer algorithms that improve with experience.

Scheve, professor of political science and global affairs, is a political economist who studies the domestic and international governance of modern capitalism. He comes to New Haven from Stanford University and previously served on Yale’s faculty from 2006 to 2012.

Melissa Ferguson, professor of psychology, is another exciting hire in the social sciences, Gendler said. Ferguson, who most recently was senior associate dean of Social Sciences at Cornell University, is an experimental social psychologist who is currently studying how people can update their memories, control their behavior, and modulate expressions of prejudice.

The FAS has reinforced its long-standing strength in mathematics by hiring two new faculty, Anna C.  Gilbert and John Schotland, both from the University of Michigan. Gilbert, the John C. Malone Professor of Mathematics and professor of statistics and data science, performs research at the boundaries of several disciplines, including mathematics, computer science, and statistics.

Schotland specializes in mathematical physics and will contribute to Yale’s path-breaking work in quantum science and technology, Gendler noted.

The new FAS faculty brings diversity and excellence to the humanities, social sciences, sciences and SEAS, highlighting the university’s drive to recruit and retain a diverse faculty, she said. In November 2015, President Peter Salovey announced a $50 million investment to recruit a diverse and excellent faculty.

That investment is paying off, Gendler said.

“We’re really moving the needle,” Gendler said. “We’re starting to see the results of committed efforts to ensure that our faculty reflect excellence across the full range of disciplines, perspectives, and experiences necessary for transformative scholarship, path-breaking research, inspiring teaching, and broad-reaching collegiality. We are thrilled to bring to campus such an extraordinary and diverse group of faculty.”

More information on all of the new faculty members is available on the FAS website.