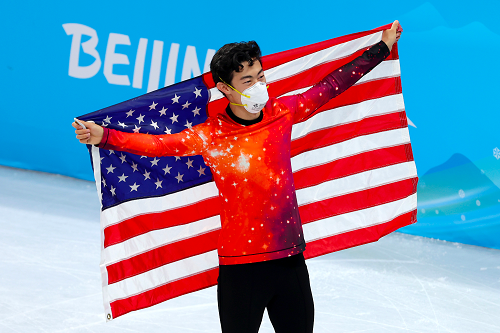 All is Golden for Nathan Chen ’24 by Hamera Shabbir

It was a Nathan Chen ’24 masterclass as he earned the highest short-program score in Olympic history, won silver with Team USA and finished with a flourish to win gold.

Taking to the ice last in the men’s singles figure skating competition Thursday at the 2022 Beijing Winter Olympic Games, the statistics and data science major proved himself to be the Quad King, three-time world champion and now, Olympic gold medal winner.

Chen capped off his record-breaking Olympic run with a gold medal in men’s singles skating, adding to a silver medal won in the team event. He first took to the ice in Beijing by lifting his team to the top of the men’s singles short program while setting a personal best of 111.71. Not satisfied with that result, Chen proceeded to break the world record in the men’s singles short program, recording yet another personal best at 113.97. On Thursday, Chen capped off his Olympic run by earning 218.63 points in the free skate, launching himself to a combined score of 332.60 and first-place finish.

“I mean it’s a whirlwind right now — everything is happening so fast,” Chen said to NBC after his gold medal winning performance. “That program is really fun to skate. At the end I really just had a blast out there and I am really grateful. When I finished the last jump, I thought I was pretty close [to the win].”

Skating to a medley from the Elton John biopic “Rocketman” and wearing his nebulous Vera Wang costume, Chen opened his performance with his noted quad jumps. He strung together a quad lutz followed by a quad toe loop-euler-single flip followed by a triple axel and triple lutz, triple toe-loop combination. Chen established his proficiency at jumps before launching into an artistic dance break, a smile painted wide across his face as the crowd cheered. He ended the performance at the center of the rink as delegations across the stadium leapt out of their seats into a standing ovation.

With Thursday’s majestic performance, Chen has finally secured the gold medal that has eluded him since the 2018 Pyeongchang Winter Olympics. At the age of 18, Chen entered the Games as a medal favorite but came up short, leaving Korea with only a team bronze and fifth place individual ranking. Multiple errors in the short program knocked him down to 17th, but he rebounded in the free skate with a history-making attempt at six quads, five of which were successful.

After falling short at Pyeongchang, Chen maintained world-class showings through titles and new records. Just one month after his fifth-place finish, he won the first of his three World Figure Skating Championships. He went on to claim his second of three Grand Prix Final titles in December 2018 and maintained his fine form since as the U.S. National Champion.

Chen’s biggest challenge entering the Beijing Games was his peers from Japan. Yuzuru Hanyu, 27, is a two-time Olympic champion and prefaced the competition declaring his intent to land a quadruple axel — a feat that has never been successfully landed in competition. Hanyu attempted the jump twice in the free skate, but was unable to stick the landing either time and ultimately settled for fourth. Yuma Kagiyama of Japan earned silver with a combined score of 310.05 while fellow countryman Shoma Uno secured bronze with a combined score of 293.

“You can’t imagine how it feels,” Chen said of his Olympic-winning moment in a post-skate press conference. “This means the world to me. I have the family connection [to Beijing]. It’s amazing to have this opportunity to do it here.”

Nathan Chen is a student in Jonathan Edwards College.

Hamera Shabbir covers golf and fencing for the Sports desk and the School of the Environment for the Science and Technology desk. Originally from California’s Central Valley, she is a sophomore in Branford College majoring in Political Science with an interdisciplinary concentration in Environmental Studies.
https://yaledailynews.com/blog/2022/02/10/all-is-golden-for-nathan-chen-24/