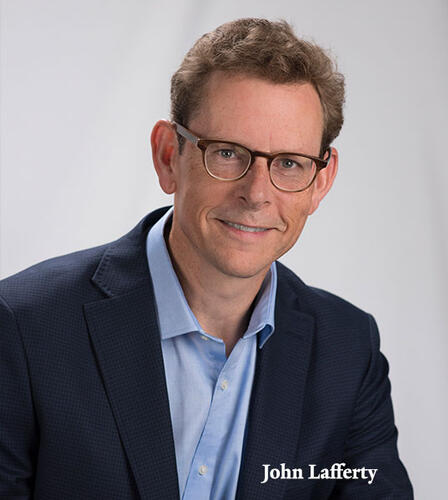 Congratulations to John Lafferty!  John has been named the inaugural director of the new Center for Neurocomputation and Machine Intelligence in the Wu Tsai Institute.

John Lafferty has been named the inaugural director of the new Center for Neurocomputation and Machine Intelligence in the Wu Tsai Institute at Yale University.

The Center for Neurocomputation and Machine Intelligence is one of three cutting-edge, interdisciplinary centers at the Institute, alongside the Center for Neurocognition and Behavior and the Center for Neurodevelopment and Plasticity. The Center’s vision is that fundamental advances in the understanding of human cognition will both require and enable new computational frameworks for machine intelligence. Its focus, therefore, will be to discover next-generation algorithms and models that reflect the mechanisms underlying intelligent behavior in humans and other animals. While the goal is to better understand human cognition, Lafferty expects that insights from neuroscience will ultimately lead to advances in artificial intelligence that will benefit a range of applications. The Center will also develop resources to help Yale scientists make sense of the large datasets that are being generated in neuroscience research across a spectrum of instruments, spatial-temporal scales, and species.

“One of the things that’s so exciting about the Wu Tsai Institute is that it’s founded on the premise that to make real progress, we absolutely have to work across the traditional boundaries between disciplines,” Lafferty said. “That is the principle of `knowing together.’ And this collaboration will be crucial to the success of the science. Remarkable progress has been made in neuroscience outside of developments in AI, data science, and machine learning. Allowing them to cross-pollinate, in the way the Institute envisions, can take us to the next level.”

The Wu Tsai Institute was established through a generous gift by Joseph C. Tsai ’86, ’90 J.D. and his wife, Clara Wu Tsai, to form a dynamic, multifaceted organization bridging the psychological, biological, and computational sciences. Led by Institute Director and Professor of Psychology Nicholas Turk-Browne, the Institute will bring together hundreds of researchers in understanding the brain and mind at all levels, leveraging the expertise of Yale faculty in an interdisciplinary, university-wide effort.

Lafferty is the John C. Malone Professor of Statistics and Data Science at Yale, with a secondary appointment in Computer Science. His main area of research is machine learning, computational and statistical aspects of learning algorithms and high-dimensional data, and modeling human language. Lafferty received his doctoral degree in mathematics from Princeton University. Prior to joining the Yale faculty in 2017, he helped launch a new Ph.D. program, the Committee on Computational and Applied Mathematics, at the University of Chicago. He was also a faculty member in the Computer Science Department and Machine Learning Department at Carnegie Mellon University, where he played a role in founding and directing the Machine Learning Ph.D. program. He initially began his work in machine learning at the IBM Watson Center in Yorktown Heights, N.Y.  For more than ten years, Lafferty has been on the advisory board of the Neural Information Processing Systems Foundation, which hosts the leading conference on machine learning and neural computation. He is a founding co-editor-in-chief of the ACM/IMS Journal of Data Science, a new journal being designed to bridge the computer science, machine learning, and statistics research communities.

“John is a world-class data scientist whose interest in the mind and brain means that the Wu Tsai Institute will benefit from his statistical and mathematical genius. To have someone of John’s stature lead this center immediately and exponentially increases the Institute’s potential as a whole,” Turk-Browne said. “With the colleagues he will inspire and attract, he will help discover basic truths about the brain by accelerating the integration of cutting-edge machine learning into neuroscience. In turn, these truths can be incorporated into new computational theories that can be used to simulate and understand cognition.”

As Center director, and with a joint role as an Associate Director of the Institute, Lafferty will be overseeing operating facilities and advanced equipment and technical staff at the Institute’s 100 College Street location (scheduled to open in fall 2022), as well as planning seminars and events, managing computational coworking space for both current and newly recruited faculty, and interfacing with departments across Yale’s campus. The Center will also build a core facility for advanced computation, data visualization, and data management to support the Wu Tsai Institute’s mission.

“Integrative data science and neuroscience represent two of our top scientific priorities at Yale,” said Michael Crair, Vice Provost for Research and Ziegler III Professor of Neuroscience and Ophthalmology and Visual Science. “It is a privilege and a pleasure to support the team at the Wu Tsai Institute to bring these fields together under John’s leadership. This combination is going to be a force multiplier not just for our work here at the University and Institute, but for these fields as a whole.”

Asked about what will distinguish the WTI at Yale, Lafferty said: “You know, it’s really hard for scientists who are trained in different areas to develop a common language and get to where they can truly communicate and problem solve together. We plan for the Wu Tsai Institute to be a place where this happens naturally every day—and it’s going to result in some real breakthroughs.”