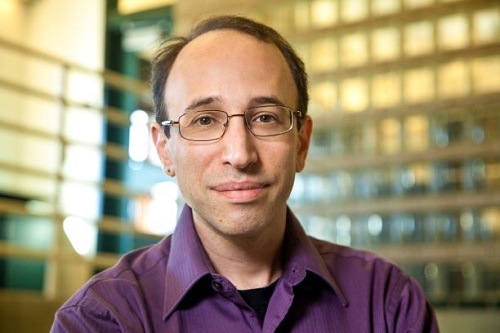 Daniel Spielman, newly named as Sterling Professor of Computer Science, focuses his research on the design and analysis of algorithms, network science, machine learning, digital communications, and scientific computing. The Sterling Professorship is the highest honor bestowed on Yale faculty. Spielman’s work helped revolutionize the field of error-correcting codes, which allow communication devices to transmit information even if part of it is corrupted. That work has made communication faster and more reliable and has been used for broadcasting high-definition television. In 2013, he and two collaborators solved the Kadison-Singer conjecture, a problem that had gone unsolved by mathematicians for more than 50 years. Its solution, scientists believe, could have significant implications for the field of statistics. A 1992 summa cum laude graduate of Yale, where he earned exceptional distinction in computer science and received the Beckwith Prize in mathematics, Spielman received his Ph.D. at the Massachusetts Institute of Technology. He served as an assistant and associate professor of applied mathematics at MIT before joining the Yale faculty in 2006 as professor of applied mathematics and computer science. Prior to his new appointment, he served as the Henry Ford II Professor of Computer Science. Spielman has been recognized with numerous awards and honors for his scholarly contributions. In 2013, he received a MacArthur Fellowship, popularly known as the “genius” grant, from the John D. and Catherine T. MacArthur Foundation. He was awarded the 2010 Rolf Nevanlinna Prize from the International Mathematical Union, the 2009 Fulkerson Prize, and, on two occasions, the Gödel Prize for outstanding papers in the area of theoretical computer science. He is a member of the National Academy of Sciences.