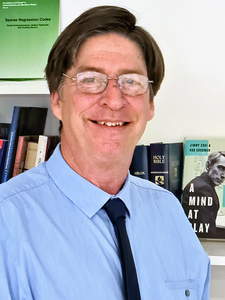 Congratulations to Andrew Barron!  Andrew has been appointed Dilley Professor of Statistics and Data Science.

He is a member of the Faculty of Arts and Sciences in the Department of Statistics and Data Science and the Applied Mathematics program.

Barron joined the Yale faculty in 1992 after holding positions in industry, a research appointment at Stanford University, and faculty positions at the University of Illinois. He has made significant contributions in the areas of statistical information theory, statistical inference, model selection, optimal communications, the minimum description length principle, probability limit theorems, asymptotics of Bayes procedures, curve and surface estimation, artificial neural networks, approximation theory, and investment theory. His work bridges statistics and electrical engineering. In recognition of this work and his contributions to information theory and statistics, Barron was named a fellow of the Institute of Electrical and Electronic Engineers and received the Medallion Award from the Institute of Mathematical Statistics.

He is the author or co-author of more than 80 peer-reviewed publications and dozens of technical reports and holds multiple patents for his discoveries. A sought-after expert, his speaking engagements have taken him to the University of Southern California, Princeton, MIT, Cambridge, Harvard, Helsinki University, the University of Paris IV, Tokyo University, and other venues around the country and around the world. As the former associate editor of the journals IEEE Transactions on Information Theory, Annals of Statistics, and Neural Networks, he has played a key role in setting the agenda for the field.

He earned his bachelor’s degree at Rice University, and a master’s degree and his Ph.D. at Stanford.